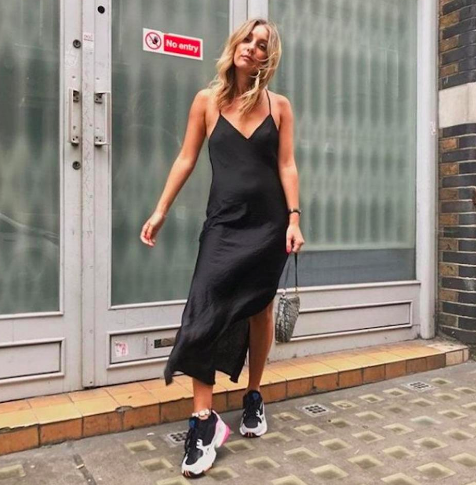 Quick! Buy this dress in Topshop before your local closes for good

There was no stopping me on Sunday. I was slightly hungover, I had a lot of time to kill and nowhere to go. So I started walking ‘aimlessly’ towards the St Stephen’s Green Shopping Centre and oh! There’s Topshop on the way and, oh my! There is a MASSIVE sale on. How could I resist?

It’s on because it’s one of the stores on Philip Green’s Arcadia hit-list. I’ve felt bad about picking up bits here and there because of Sir Phil’s rep as a dirty dog. But those purchases have always been only little bits and pieces and being perfectly honest, I’ve never regretted buying any of them and I’ve worn them all to death.

I’ve only bought one full price item from Topshop and that was because I had a voucher. It was a Lonsdale zip-up top that I left behind in Korea on purpose for some reason. I still think about it sometimes and haven’t thrown anything out since except if they’ve become genuinely unwearable.

Like the grey pants I bought for €10 and wore for two years straight. They were my first pair of skinny jeans and they made me feel like Kate Moss. I split the crotch apart eventually but it wasn’t until after three patch up jobs and more holes elsewhere that I admitted defeat.

I had a pair of houndstooth print shoes that I wore to work when I got my first ‘real’ job and they made me feel like a professional. Then there was the leopard print jumper that kept me stylish and warm during a good few winters.

Topshop was the coolest place to shop when I was a teenager and it still has the hip factor. The clothes are not worth the price though (they’re the same quality as H&M et al but triple the price) hence the sale-only buying.

This dress was, of course, on sale. The original price was €59; I got it for €19. It’s a dress I’ve wanted for years. A nineties style satin slip dress in black. Topshop reignited the satin dress and skirt thing last year. The skirt in particular has made it as a style staple – everyone has one. They’ll go out of style soon enough but hold onto it. I’ll be channeling Carolyn Bessette Kennedy in this (but wearing it with runners for daytime).

Topshop was always so good for these kind of pieces. Things that are chic and cool at the same time. No wonder Kate Moss chose the store to launch her first collection.

Once my local Topshop closes, I probably won’t shop there again. It’s the type of shop where you have to try the items on because they’re meant for teenagers who are way cooler than you, so I won’t be shopping online.

There’s that damn moral issue, too. Philip Green is a baddie and I shouldn’t support him.

But if you’re passing a Topshop that’s set to close, there might be one last thing in the sale that you’ll buy then and have forever.