I’m getting used to the horrible realisation that at 32, my days in Hollywood are numbered. I mean, they would be, if I was in the business of show. It’s sickening and unfair, but it’s true; the most valuable asset a woman can have is youth – and youth fades.

An Orange is the New Black actress I’d never heard of entered the public eye yesterday when she posted what the Daily Mail might call “a rant” over her recent experience of ageism and sexism. Jamie Denbo tweeted yesterday, “I was just informed that at the age of 43, I am TOO OLD to play the wife of a 57 year old.”

“This is a FIRST marriage, btw. Not a re-wife. Which would make a little more sense.”

And that about sums it up. Sums up Denbo’s situation and Hollywood’s hatred of women who dare age. I know. Rage.

It’s worse when you’re in an industry that you can never attempt to enter unless you’re beautiful or super duper talented, but women are better off in life, no matter where they live or what they work at, if they are good looking and young. Even in an age of woman power and neo-feminism, the cosmetic surgery industry is booming. It’s not the domain of the rich and famous any more; you can get a shot of Botox in a local salon in the West of Ireland. When “looking good” is this easy, women are expect to obey. But if women in their thirties are made to feel ‘past it’, how must women in their sixties feel?

France’s President Elect Emanuel Macron has a wife and she’s blond, thin and ancient. Since the 39-year-old politician entered the Presidential race, his wife Brigitte Trogneux has become yet another other half, scrutinised from top to bottom and inside to out. She’s the most famous person (almost) eligible for a bus pass.

You’ll already know that she is 24 years her husbands senior, she was his teacher and she is a grandmother. But Brigitte Trogneux is not the type of sixty-something year old to retreat into a few too many nightly Pernod’s, lamenting her youth. 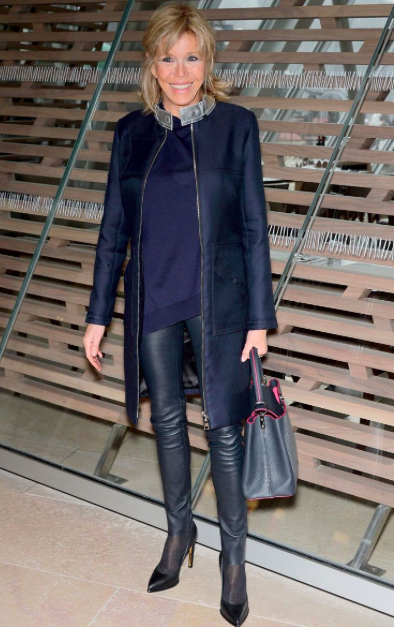 Trogneux has the glossy, put together look of an ingenue who has evolved from short skirts and ballet flats. But tThat’s not to say that Trogneax has abandoned short hemlines; with those legs, would you?

The French support her style. Delphine de Canecaude is a Paris-based art director who told L’Express: “She’s rock’n’roll. Not for a second does she say, ‘I’m 63, so I cannot wear short skirts.’ Twelve-inch heels, sleeveless dresses, leather trousers, she dares everything.”

It’s a rich and privileged and high-maintenace look, but it doesn’t ever tread on the out-of-reach glamour territory favoured by Melania Trump.

Skinny jeans and blazers are a go-to for thirty-somethings – and 60-somethings as it happens. And yes, you can wear sneakers.

Women in their sixties are largely forgotten by the fashion industry, and women of that age are often confused about their decade’s dress code. Should you dress ‘like a granny’ even if Peig is your style foe? Of course not. You dress the way you like, but if you’re worried about looking like mutton dressed as lamb (because unfortunately, it happens), look to famous people a similar age for inspiration. They’re only a Google away.

Diane Keaton is 71 and her style is as covetable as it was in her Annie Hall days. Jessica Lange, Susan Sarandon and Meryl Streep are all in their 60s and dress impeccably. But Brigitte Trogneux isn’t a movie star. She’s a relatively normal woman, but one who is slim, self-assured and stylish. Granted, she has a figure that women my age would kill for, and the money to keep herself freshly groomed. But you don’t need money to adopt that confident smile or excellent posture, two simple elements that prove you don’t need society to tell you when you’re done.