The Great Fashion Shake Up

Fashion used to be so predictable. Not the fashion itself, but the way in which it was presented. There were two fashion seasons a year in four locations, where editors, buyers and one or two enthusiastic A-listers would sit side by side for a viewing of the brand new trends, which were then only revealed to the public when the profiles and spreads of the shows would appear on the pages of the glossy magazines a few months later. All that changed with the internet – live streaming and instant uploads meant that we Z-list enthusiasts could be in on the action from the get-go, the interest in street style surged and so random bloggers would hang around the entrances hoping to be photographed in their get-up, only to be seen on the front row the very next year, pioneers that they were in engaging online audiences. 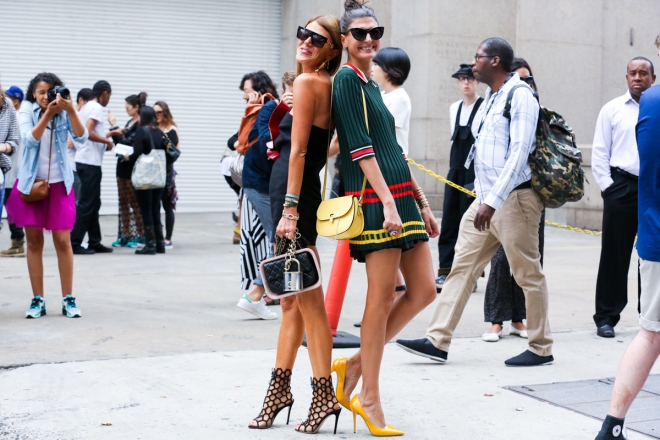 What remained somewhat the same were the models. Ethereal, willowy waifs and amazons would parade up and down the catwalk with determination, being whisked from show to show with little time to spare. Now there’s been another shift. The bi-annual shows are giving way to more and more special presentations, away from the traditional centres of fashion, – New York, London, Milan and Paris – away from the runways in some instances, away from the usual times of year (think the rise of the Pre shows). With that, the models are changing too, reflecting a growing diversity the public has been craving ever since we came privy to the once much more elite world of fashion.

New York Fashion Week is wrapping up, and the shift there was perceptible. Take The Row for instance, the line created by Mary Kate and Ashley Olsen and lauded by those who desire relaxed, luxurious style. Never a pair to play exactly by the rules – in 2014 their lead model was 65 year old Linda Rodin – this season saw a vast array of models in their 30s and 40s walk, reflecting the audience they know they appeal to. What wealthy, sophisticated consumer wants to see Gigi Hadid in the luxe look when they know that her real-life preferred look is athleisure? The cult of youth is slowly being dis-mantled (due in some part to better lifestyles and more subtle, natural looking cosmetic treatments) and the power of women post their twenties is beginning to be accepted and celebrated.

J Crew too eschewed the traditional model formula in favour of Friends of the Brand, admittedly very good looking friends. They pioneered the idea last season and continued this year, with the ‘models’ ranging from ages 9 to 67. It’s a natural step on from following ‘influencers’, seemingly regular people who have access to designer duds and are pictured looking good in them, but at the same time there are a great many more people to identify with in relation to the traditional fashion campaign.

Vogue is also getting in on the action. Last week Vogue US debuted its March issue cover, which features models of different sizes and races (including Ashley Graham, the famously “plus-size” model who also walked in the most recent Michael Kors show, alongside 43 year old Amber Valletta). Some controversy was cast over photoshopping accusations, but in any case it’s a step in the right direction. Not as a big a step as its French counterpart, whose groundbreaking March cover features transgender model Valentina Sampaio, but a step all the same.

So what next? See Now, Buy Now is the logical step that all brands will soon be taking. Fashion Houses are likely to start doing their own thing, expanding collections during the year and hosting them in locations of their choosing. We’ll see even more diversity in modelling than before, as the Fashion world catches on to what people expect in the real world.