I’ve lately been in a quandry, and dear readers I suspect that many of you are in the same position. After summer hi-jinks including but not restricted to weddings, festivals, holidays booked for October on a whim, I’ve been left with no money to speak of, and that has fairly scuppered my plans on creating an A/W16 capsule collection. Woe is me, right?

Right! Instead of even window shopping I have been walking stoicly passed the displays of lovely autumn clothing and focusing my gaze on my over-stuffed and under-whelming wardrobe. And funnily enough I’ve already found a few outfit ideas, ideas that may or may not come to fruition but which I will give a go nonetheless. Come with me on my voyage through the closet of despair.

No. 1 – The vintage swimsuit

I found a blue, white and red striped swimsuit that belonged to my mother in the 80s. It’s kinda cotton, which to me is weird for swimming togs (as they were known back in the day), and has spaghetti straps, and I’m rather taken with it. It’s practically a body suit, which are all the rage these days! I plan to wear it a la Gillian Jacobs and her red spandex number in Love, with nonchalance and a scowl.

Too long have our bras been hidden under the depths of our clothes I say! On my wardrobe quest I discovered a tangle of greying, fraying old underwear that I threw out in a near rage, leaving me with a mere handful (don’t worry, there’s more than enough to last until washing day). One piece that remained was my ‘good’ black bra and it struck me as sad that I couldn’t wear it out and about to a chorus of ooohs and aaahs at its prettiness. In a moment of bravery that hasn’t happened yet, on an upcoming night out I am going to put it on under a sheer-ish black shirt that I also re-discovered, with messy hair and a berry lip. I am small of bust and long of hair, so you’d hardly even notice! It’ll go something like this, albeit sadly missing the cool silver stars:

So, velvet dresses aren’t items that everyone has in their wardrobes, but somehow I have one. It’s another 80s hand-me-down, literally from the famous dressing up box. Am I glad I kept it; velvet is the texture of the season don’t you know! It’s burgundy, Grecian style with a boatneck that goes so well with a perm and blue eye shadow. I’m going to invest a tenner on getting it taken in by a dressmaker (see why that’s a good idea here), and then wear it to every party in December. This is my inspiration:

Other things I’m going to try in my poverty-stricken-induced desperation: silver sequined platform sandals with black tights (platforms are going to be big again). White button up shirt or a black polo neck underneath sundresses and maybe an actual slip (cheaper than the nightwear-as-outerwear trend to be found all over the high-street!). Boot-cut jeans (remember them?!) rescued from 2002, cut at ankle length to create the look I have thus been avoiding like the plague – cropped flares. 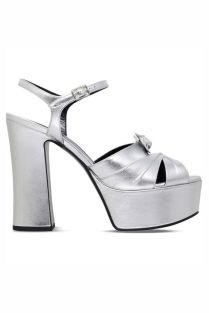