If you haven’t noticed that Gucci is having a moment you haven’t taken note of Gucci since Victoria Beckham (nee Adams) tried to decide between identical little Gucci dresses in Spice World. And that classic came out in 1997. 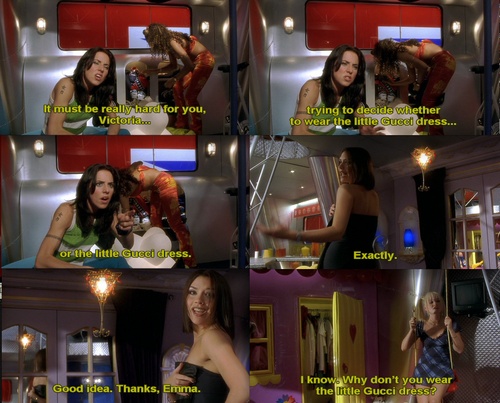 The house of Gucci was founded in Italy (where else?) in 1921 and has thus enjoyed worldwide success for nearly 100 years. Under the creative directorship of Frida Giannini from 2005 – 2014 the house flourished and became known more for its cool girl credentials than its Posh approved LBDs, so when Giannini stepped down in December 2014 there was a collective nervous intake of breath from her devotees. They needn’t have worried; since wunderkind Alessandro Michele was appointed to the role in January the following year, Gucci has been revived even further, and at the time of writing his recent collections are at once one of the most sought after and critically acclaimed in the world of fashion.

The aesthetic is pretty out there. Clashing colours, prints galore, mishmashing of styles – it shouldn’t work but it does. In February Brie Larson collected her Oscar in a Gucci dress, that ruffled number in the middle pic has been seen in different guises all over the red carpet (Dakota Johnson, among other rising style stars is a big fan) and for some reason the spacey-70s-nerd meets kookiest-but-also-somehow-coolest-girl-in-the-class look works on pretty much everyone. Hence why pretty much everyone is embracing it.

But what’s really been getting the fashion set going is Michele’s padded mule. It comes in gold, it comes in green, it comes in putty grey, and anyone who’s anyone has got a pair on their pedicured hooves.

The sandals must have been in part inspired by those Anna Wintour is constantly clad in; a Manolo Blahnik pair that have been adapted by the designer over time, and that she has countless pairs of in rotation. And why wouldn’t she? They’re comfortable, a neutral shade and go with everything.

Gucci’s pair offer a bit more oomph and come in several shades, although the gold version seems to be getting the most attention.

Because they are really versatile and probably really comfortable, while being really distinctive, the shoes are a brilliant way of dipping your toe into the Gucci pool without going too full on -although why you wouldn’t want to embrace the entire look is beyond me. If you do want to go the whole hog (without the hefty price tag) all you need is a pair of brightly hued tights (red is best), a pleated midi skirt (trust me, they’ll be all over the high street this summer), a ruffled or pussy bow blouse and a huge corsage or bow and you’re set. Add a sandal (yes, with the tights), and a pair of Deirdre Barlow glasses and you’ll be ready to join the Allessandro Michele posse, in spirit at least.