The Age of Everything

I am addicted to looking through online photo galleries. Street style galleries are my favourite but I am not averse to browsing the celeb galleries on People and Us Magazine .coms. Don’t judge me.

In between trying to focus on True Detective today I came across a pic of Carrie Underwood strutting her stuff and I shocked myself by liking her outfit. There she was, all American tanned (well, she is American, though my reference is more towards the colour all tights used to be before Dunnes realised Irish people fade into the sand like ghost chameleons when they lie on it) and sporting white shorts (!) a baggy, pre distressed t-shirt (!!) and, and cowboy boots (!!!) and I thought that that was an outfit I wouldn’t mind wearing myself.

Then, I came across this really cool video and I realised why I thought such thoughts. We the people of the 2010s can wear anything we like.

Which style year wouldn’t you wear? Ok, I have one – it’s 2005 but that’s probably because it’s too soon ago so it’s too out of fashion, if you know what I mean. Old style clothes are so in St Vincent de Paul are sectioning off an area and calling it Vintage (the one on George’s Street in Dublin is good, check it out!)

I would even wear the ’80s look, but I’d probably lay off the electric blue eyeshadow. There is a line.

Vintage is the buzz word but it doesn’t have to be a bad word, which often happens when something gets popular or, gasp, trendy. The best thing about this overarching – ok, I’ll say it – trend – is that it’s over arching. Whether your favourite skirt is in the style of Joan Holloway at work, Susan and Sharon (of the original Parent Trap) at a camp dance or Madonna doing her thing in the ’80s, it’s vintage and you go werk it, girl. 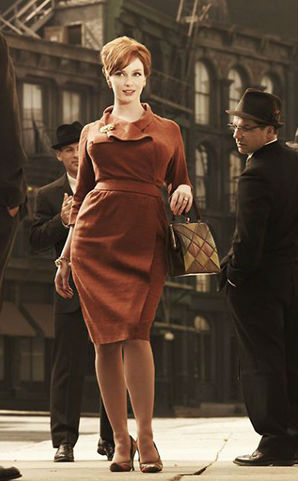 It’s not even as if we need to go out looking like we’re in fancy dress if we want to embrace another era’s style. I would totally wear a dress like Joan’s above, but I would modify it – because the basics of style is to personalise it. I wouldn’t wear my hair in a vintage style and I would wear modern shoes but I’d keep the bag – it’s darling!

Back to Carrie Underwood, the exact era of her ensemble, er, can’t really be defined as such. It’s just shorts, a t-shirt and cowboy boots – a combination country and western girls have been wearing for years. Decades even. See? Vintage.