Men’s Collections 2015: The Good, The Bad and The Ugly

There’s nothing like a good cameo to get your show noticed. They do it successfully all the time in TV and film – check out Oprah in 30 Rock, Matt Damon in 30 Rock and Jennifer Aniston in, er, 30 Rock, so why not fashion too? 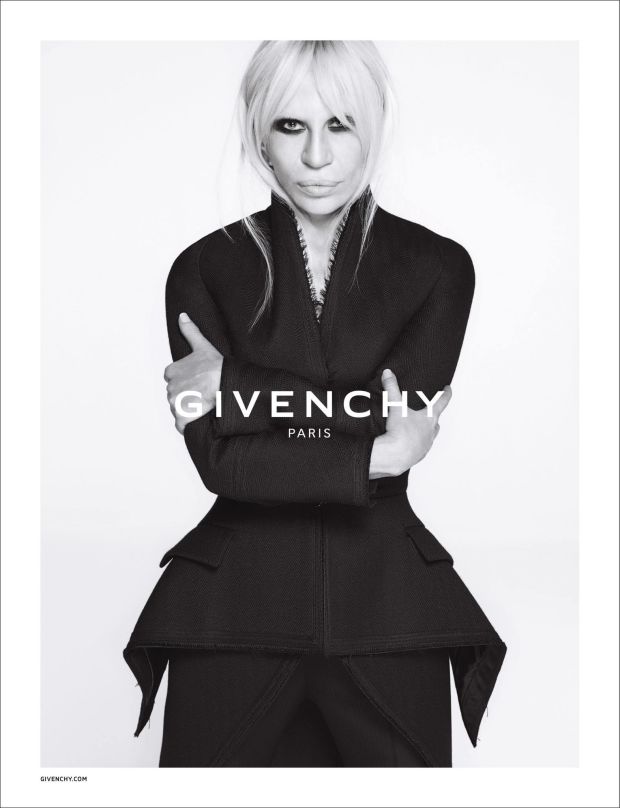 Granted, it didn’t go all that well when Carrie Bradshaw hit the runway, quite literally, in an episode of Sex and the City, but Victoria Beckham strutted down the catwalk for Roberto Cavalli pre-fashion fame, the current campaign for Marc Jacobs features such faces as Cher and Willow Smith, Donatella Versace is going all meta on us and has become the face of Givenchy and the menswear shows have been coming down with famous faces, slowly but surely cementing the increasing interest in men’s fashion. 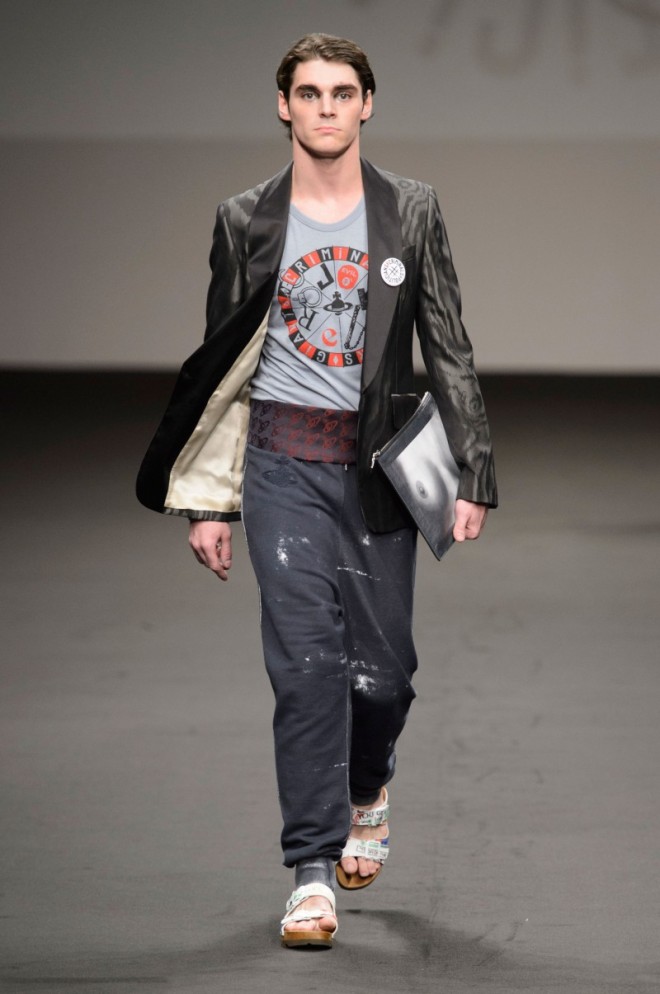 R.J. Mitte, a.k.a. Walt Jnr (aka “Flynn”) turned heads when he walked for Vivienne Westwood, complete with breast bag, paint spattered trackie bottoms and cheekbones that could slice any unsuspecting supermodel sitting in the FROW in half. It paved the way for the trend that dominated the menswear collections – classic suits with a twist. 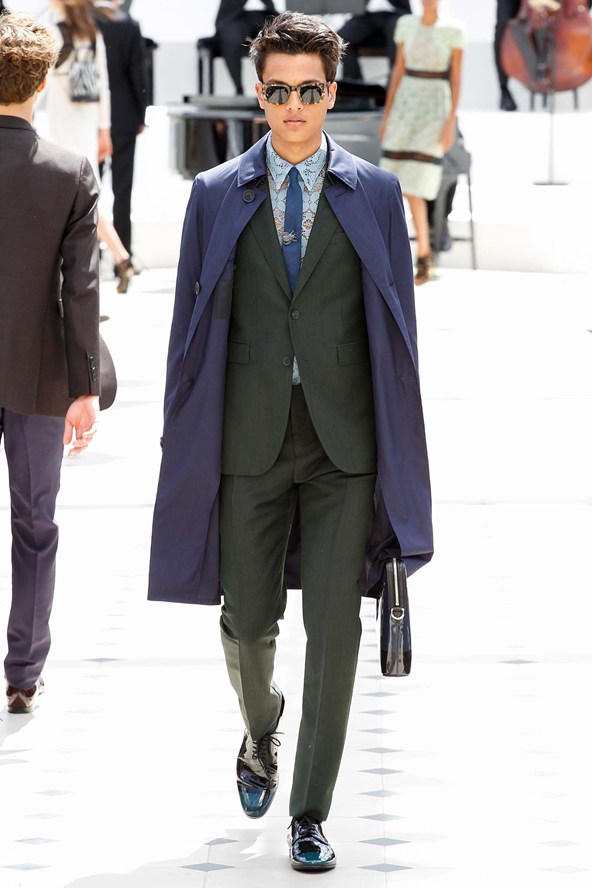 Case in point, Burberry’s offering. On first glance Chistopher Bailey’s suits are sharp and smart, but like his gorgeous creations for womenswear it offers a quirky, cool flourish – see the amazing lace cut shirt and beetle tie-brooch? Amazing. Also digging the shoulder robing. 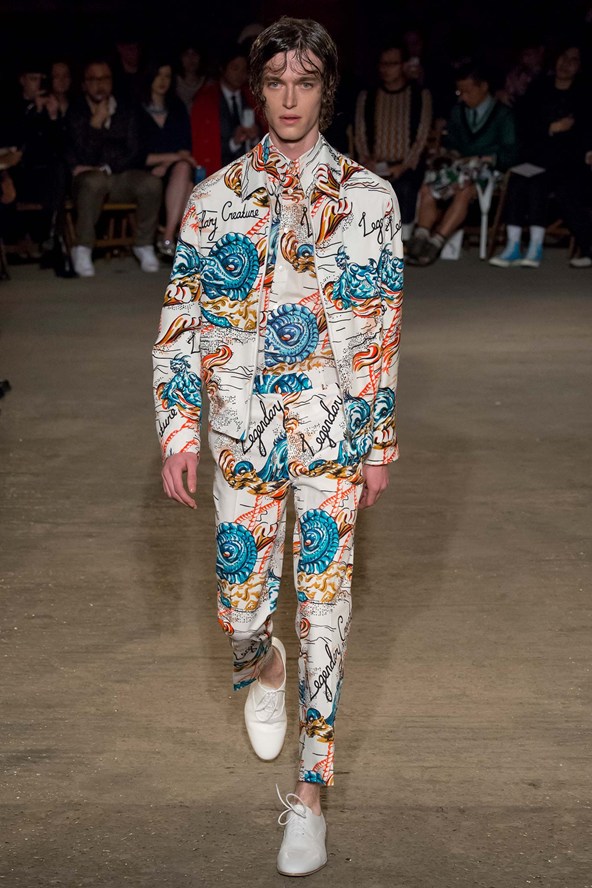 They went a little more extreme in the Alexander McQueen camp, trading the traditional blazer for a light-weight bomber, decorated all over in vivid print. It’s garish at first, but on examination it totally works. Love the slightly feminine brogues too, but the greasy looking hair can probably be given a miss.

The Valentino show gave the suit an even looser, loungewear feel, with clashing prints and (awful) sliders. The casual blazer is so nonchalant it doesn’t even care if it’s left in a crumpled heap on the floor after being worn, which will even increase its coolness once it’s covered in wrinkles. 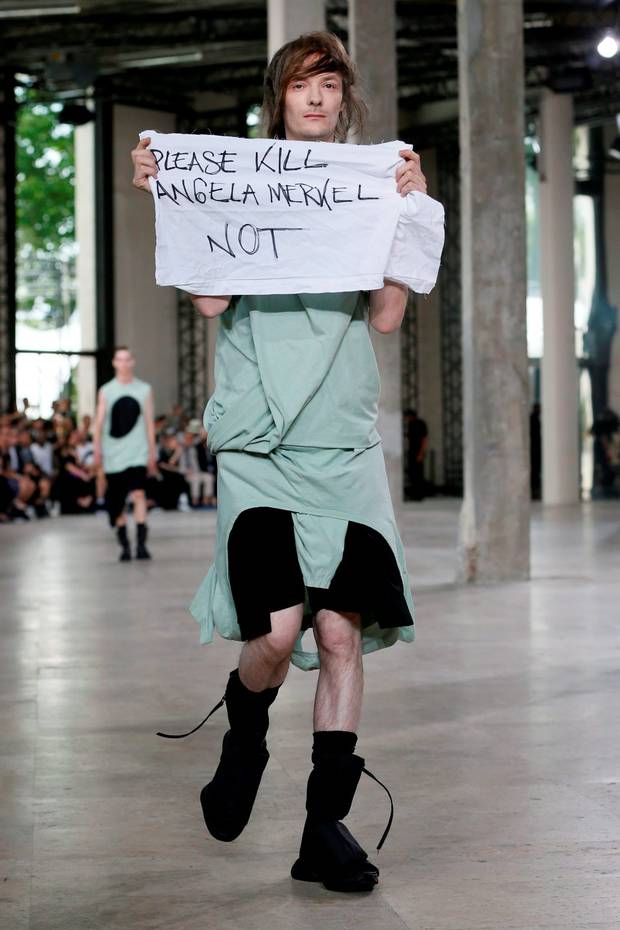 Rick Owens knows a thing or too about controversy, but it’s usually the reaction to his avant-garde designs. This model lapped up all the limelight with his political sign, a gesture which earned him a swift punch in the face when he was done from Mr. Owens, who knew nothing about the stunt. I hardly noticed it though, too busy concentrating on those mind-boggling boots. 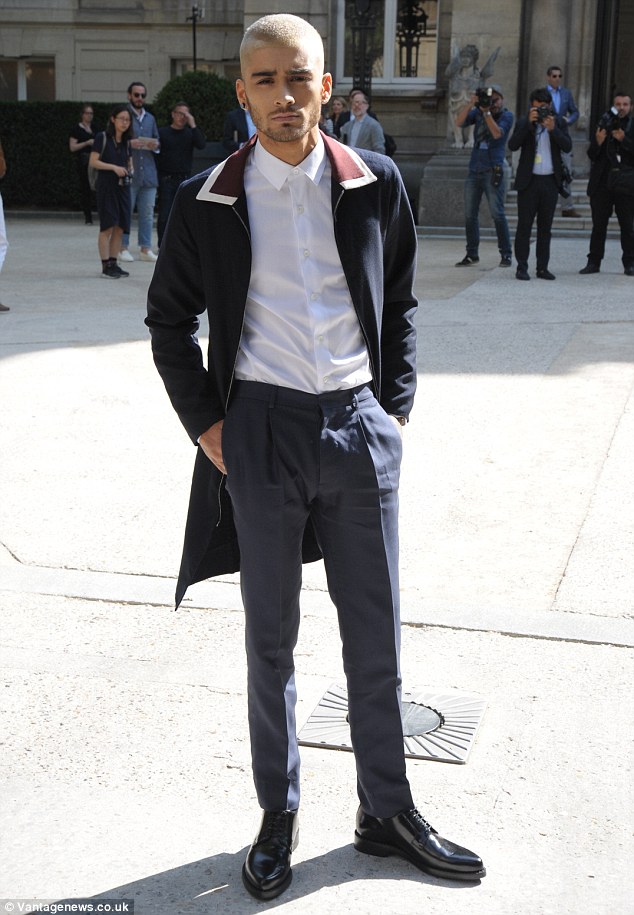 There were plenty of pretty faces on the front row at the shows, but Zayn Malick’s was the prettiest, at Valentino. The crowd still loved him and his new cropped Eminem hair, and he looked dapper as anything in his perfectly tailered suit pants and three-quarter length jacket. Whatever direction he’s going in, it’s the right one.

So what do we have to take from the Men’s Collections? Suits are still number one, but there’s a lot more scope to play around with textures, patterns and silhouettes. There’s a weird fusion between formal and sportswear going on – wear a blazer over a patterned tee and tracksuit bottoms (if you dare) or replace your suit jacket with a silky bomber jacket, or even better, a letterman jacket. The letterman is a trend I’ve been noticing loads on the streets (my boyfriend picked himself up one ages ago, and it’s so versatile), keep your eyes peeled on the gents walking by you and see what inspiration catches your eye!