Cannes tries so hard not to be Hollywood – it’s far too chic and sophisticated to compare with that vulgar town of tinsel- but then they go and turn women away from a premiere for not wearing high heels. That is totally simply despicable, ridiculous and yes, vulgar behaviour.

Why the hell should women have to wear heels to be considered dressed up? Men were the ones who started it all and they don’t have to. I like wearing heels because they flatter my legs and I like a bit of height. I’ve been wearing them for years so I am an expert at walking in them and they go with my style. But it’s my style and my choice. When I was a teenager I didn’t own one pair of flats, except the runners I had to wear for PE. Now, times – and trends – have changed and I have loads of flats and want more! Flats work. If you are comfortable with your height and if you’re happy with how your legs look in them, of course you should go ahead and wear flats with anything and everything for any and every occasion – film festivals included.

Whether your work dress code is casual, smart or business you can or at least should be able to wear flats. French Vogue editor Emmanuelle Alt is the perfect source to observe chic but comfortable work wear. 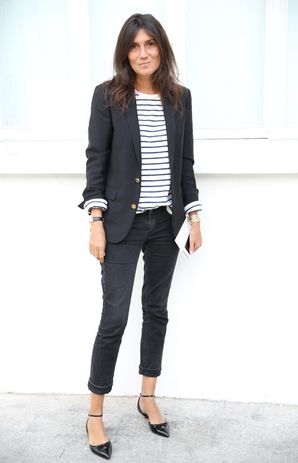 Cigarette style trousers, a loose but not baggy top and a cool blazer is such a simple combination but many people struggle to put work outfits together – work outfits that are stylish, at least. Heels would be too much with this ensemble. The key takeaway here is the length of the trousers; make sure the hem is higher than your ankle, you run the risk of looking stocky if you don’t. And another thing – one word: Brogues.

One of my simpler pleasures in life is getting dressed up at the weekend. More often than not, during the weekend daytime I’ll be wearing unflattering activity clothes or jeans and Converse because they are so much easier to walk around in. Of course getting dressed up does not mean having to sacrifice comfort, and flats to brunch, day drinks on a patio in summer or to a day of endless possibilities is a perfectly chic choice.

Obviously, summer is more flats friendly than other times of the year because it’s sandal season, not to mention espadrilles and open toes. Embrace it!

Despite what Cannes says, there is no reason why you have to wear heels with occasion wear.

I’m not saying that wearing a dress and flats is easy. It’s actually quite difficult! I’ve tried pairing pencil skirts with flats before and the length and style just don’t work for me. It has to be heels. For shorter skirts however, it’s fine and it’s cool. 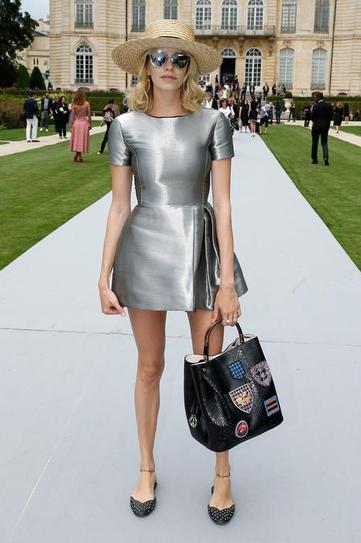 The powers at be at Cannes did a horrible thing. Film producer Valeria Richter can’t wear anything else other than flats because part of her foot was amputated, and because of that she was turned away. I’m sure she felt humiliated and I’m sure Cannes doesn’t give a fig. By and large however, the world was on her side and hopefully the whole affair will relax stupid, unnecessary dress codes. Because when it comes down to it, everyone should have the choice of how high they want their heel to be, woman or man.