Oh The Glamour! CFDA and Women of the Year Awards

It’s a lucky week for a style blogger when there are not one, but two red-carpet fashion events to drool over in the space of a few days. Two fashion capitals of the world on either side of the Atlantic paid host to all the beautiful people, first in New York for the CFDA Awards and then in London for the GLAMOUR Women of the Year Awards.

The Council of Fashion Designers of America (CFDA) held their annual awards on Monday, bringing out the great and the good of the fashion industry in the good ol’ U.S. of A. Despite being named Best Womenswear Designer for their label The Row, Mary Kate and Ashley Olsen have failed to make our top three best dressed, but congrats to the diminutive pair all the same (we tiny twins need to stick together). So, who did make the list? 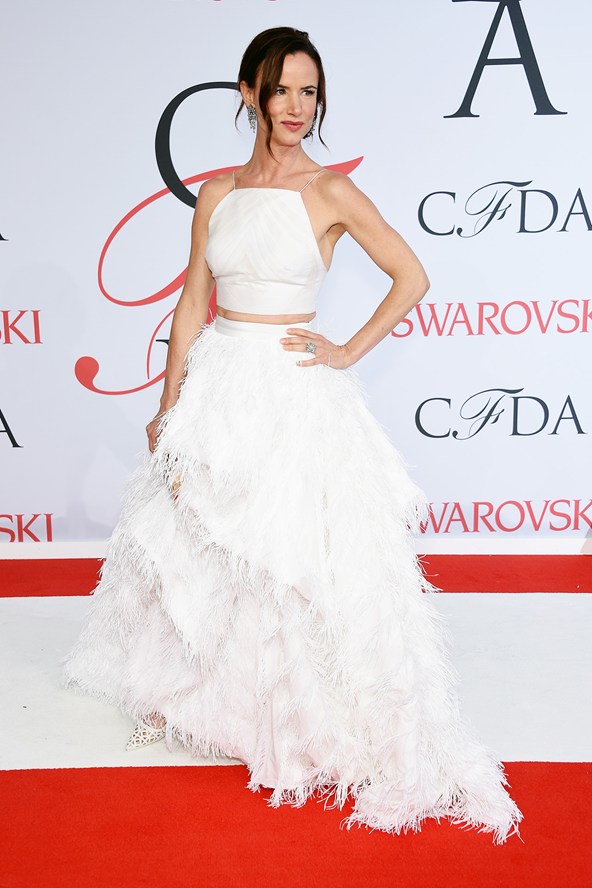 Juliette Lewis did all the talking in her Christian Siriano gown, no mean feat considering the major flounce on that skirt. The all-white trend is here to stay.

I usually shudder at the sight of a flower behind the ear or in the hair if it’s not on a beach (and even then I can’t ever quite accept it), but cool Jemima’s is subtle enough to work, and offsets the red of her two piece perfectly. Some were concerned by her added accessory of armpit hair, but if you can’t display your hirsute pride on the red carpet where can you?

It’s not often that our beloved Diane Kruger is pipped to the post, and in this Prabal Gurung number she almost made it! Effortlessly put-together and polished as always, Diane is still a winner in our eyes.

We haven’t seen a lot of the late 90s Super in recent years, but when she sashays back into our lives she does it fiercely! It’s like the dress was made for her (and being the CFDAs, it may well have been), but it’s her poised stance and perfect polish that makes her our Best Dressed of the night.

And the rest of the winners are as follows:

Womenswear Designer of the Year: Ashley Olsen & Mary-Kate Olsen for The Row

Swarovski Award for Menswear: Shayne Oliver for Hood by Air

GLAMOUR Women of the Year Awards

On to Tuesday night, and The GLAMOUR UK Women of the Year awards. A looser, less formal affair, there are gowns, there are shifts, there are suits – anything goes as long as it suitably portrays the wearer’s own personal style.

Another lady in red – I wasn’t expecting red to make such an impact this summer, but here it is in abundance right in front of our eyes! Best Radio DJ winner Fearne looks cute as a button during her second pregnancy in the unusual cape style shift, and the red ball bag is really making me want to peek inside to see what it’s holding (and how many essentials can even fit in it.)

The shoes may be a bit Strictly, but the blue tinged feathery detail is just lovely on a youngster like Ella Catliff. The hair styled back so severely prevents the look from being too girlish, and I always applaud a nifty little shoulder bag rather than a clutch on nights like these.

Pink to make the boys wink and the girls green with envy. Gorgeous shape, beautiful colours and simple hair and make-up, Gemma hits every nail straight on the head.

Could Kerry look any better? I’d very nearly say no. That voluminous hair perfectly off-sets the simple tailering, and the slightly 80s chain detail is taken from brash to class in her capable hands. Kerry, you can do no wrong.