In case you’ve been busy getting excited/dismayed by the snow, blown over by the wind or generally living your life the fact that the London Collections: Men shows have been going on in London (that’s Fashion Week for the Menfolk, for the uninitiated)may have passed you by.

Now granted, we at TMCM Ireland appreciate a good gawk at a male model once in a while; why, don’t we all? ( if in doubt see hirsute human Ken-doll David Gandy’s salivating following for proof). But like true professionals we must get down to the serious business of picking out what will look good on the real men in our lives… and what I would want to wear if I were a dapper young dandy. Which really means taking a gander at what those attending the shows are wearing. 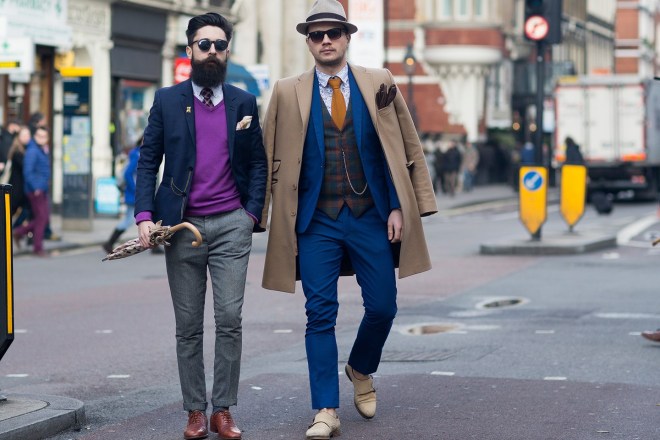 The overwhelming trend to emerge is the three piece suit, in any and every pattern. And what’s more, it’s often been topped off by a slim line overcoat draped over the shoulders. We’ve known for ages that the shoulder robe is de jour for us women (as you can see here) but who knew it was such a go to look for the men of Lahn-dan?

TM said in last Tuesday’s Post that the velvet jacket is your go for this season. Does this young gent convince? Also take note: the dickie-bow/bow tie that has been sported over the last few years seems to have been replaced for the most part by the tie. Thank God.

Camel coats aren’t just for the ladies either (but see how you can work one here!) – I love the crossover in trends from women’s to menswear, and the myriad of different ways of styling them to suit yourself.

Seaking of the ladies, this is the week for men to take centre stage, so it’s only appropriate that their female companions tone it down a bit, and adopt a menswear feel to their look. The women above look so great, with their tailored, streamlined ensembles made interesting by the choices of colour and pattern.

This is one of my favourite street style looks of the week – hello hat, hiya carryall, good day to you super scarf. After the suits, an increasing trend is more of a utility look, through which the above fills the gap.

These looks are different from, but compliment each other. Dapper Dan on the right replaces the waistcoat (or “vest” for our North American readers) with a cosy cardigan, a choice also made by others, including David Gandy, in order to slightly casual down the three-piece. Our friend on the left is looking pretty utilitarian, but the shrunken fit really works. 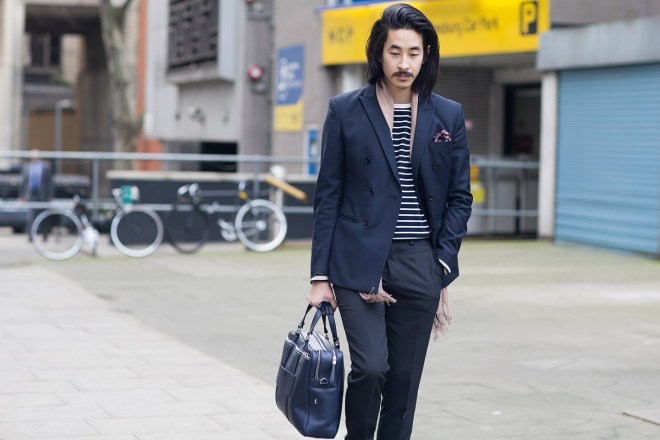 Stripes and untied scarfs were also seen in abundance, and overall an unfussy but put-together outfit was the order of the week. See boys, there are loads of ways to step up your fashion game, it doesn’t have to be a Saville Row suit. Add a scarf, a hat, a pocket square and before you know it you’ll be matching your socks!