His ‘n Hers – Eddie and Felicity

It’s the start of awards season – The Screen Actor’s Guild and The Golden Globes nominations have been announced and the scramble for the Academy Awards is on! Will “Poor Jen” Aniston win for Cake? Is Steve “Michael Scott from The Office” Carell going to nab it for Foxcatcher? Will we see some more Claire Danes happy cryface if she takes the trophy home for Homeland?

The Golden Globes nominations are here!

The delectable Eddie Redmayne has been put forward for his role as Stephen Hawking in The Theory of Everything and is generating a load of Oscar buzz. Which is good news for us as we are set to see him grace endless red carpets, alongside his co-star Felicity Jones (who has also been nominated for a Golden Globe), in their impeccable style. 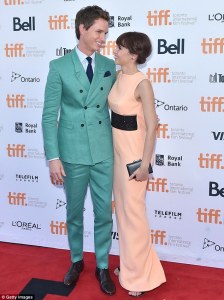 TM gave the low down on the usually casual guy’s guide to Christmas dressing on Tuesday, but for the gentleman with more of an interest in fashion you should look no further than Eddie for taking your style cues. He started out as a model but quickly realised his talents lay in acting. He has kept his sense of style however, and knows how to put together a good look. Behold:

A suit doesn’t have to be black, navy or grey (just ask Darren Kennedy!) Eddie looks magnifique in his checked number, nice matching of the tie to his shiny shoes. A cheeky grin tops it off; If you’re going to go a little bit out of the ordinary you must be prepared to wear it with confidence. 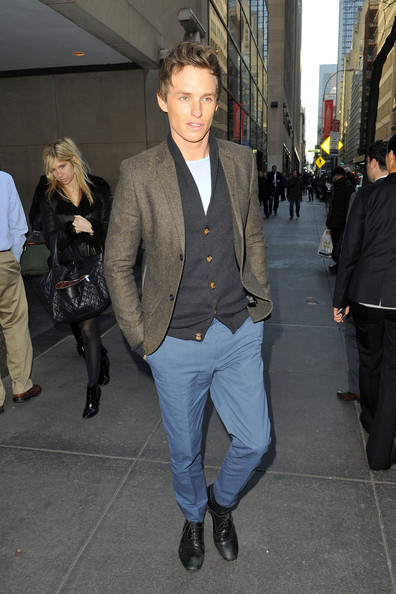 This outfit could take you anywhere, from a casual lunch and a country stroll with your lady friend’s family to the pub for some drinks with the lads – delete layers as required. I like the shape of the vest, giving a nice bit of neck warmth, and the unusual shade of blue on the trousers adds interest, while indicating your discerning style savvy.

First of all, I love the little suitcase, impractical as it is. Second, I love the the cool colour combos Eddie has put together for his flight. I imagine a lighter coloured sweater, in maybe a light blue or beige under the pea jacket, or maybe navy like his scarf. Navy and black can work; see Eddie pull it together with aplomb! 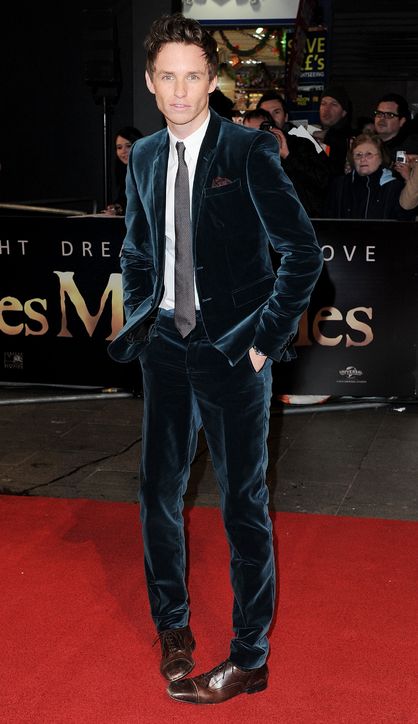 We ladies know that velvet can make a great statement but did you men know that you can do it too? Eddie rocks a Burberry suit here, in an amazing shade of greeny blue, and the pairing of brownish brogues matched with the pocket square is perfect. A tie rather than a bow-tie brings it back from being too like a costume.

And now for the girls! Felicity Jones has been slowly but surely adding credits to her name over the years, but 2014 has finally emblazened her in the spotlight. An accomplished actress she has been gaining great praise, but it’s her style credentials that’s got my interest piqued: 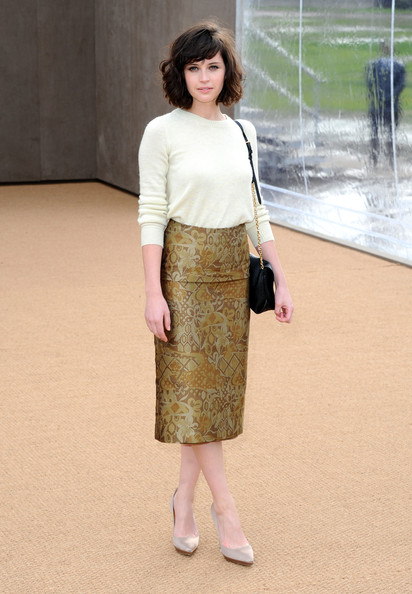 There’s a lot to be said for an embellished skirt. This Burberry midi could be styled in a number of ways – picking up one of the colour accents, going with a royal blue, sexing it up with some lace for instance – but Felicity has chosen to pare it back, with a soft, elegant result. 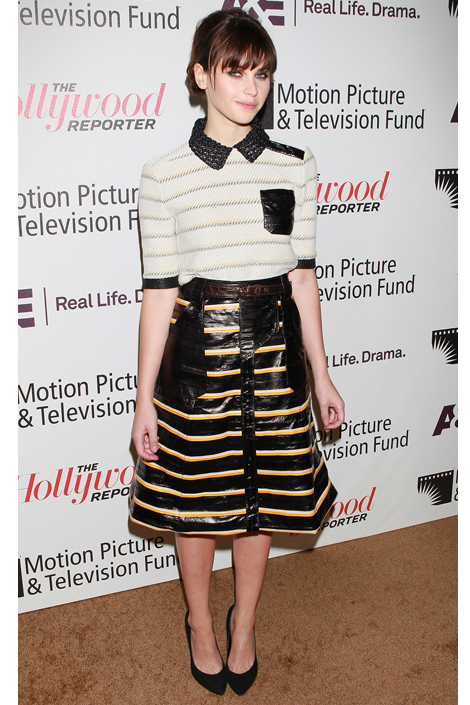 Felicity’s great at mixing textures, proving so here. The different stripes work well and the colours are unexpected. This is a great length skirt on her as well, the proportions all balancing out very nicely.

A black and white combination, although still all the range, can be boring. Add texture and some sexy modesty and you’ve got it. Love the Victorian style blouse with the leather skirt, and the semi-sheer tights and sky high patent shoes add a hint of naughtiness.

See how she oozes confidence in this Dolce & Gabbana gown? It’s always a good gamble to play with colour – even if you’re not drawn to it immediately it may well be perfect for you. A good way of experimenting is with print, as Felicity has done here. The brownish tones bring out her eyes amazingly and the plum and green really flatters her skin tone.

What other on or off screen pairings have you noticed this year? Who has upped their style game in the last 12 months? Do you have a favourite new trend you think will last the test of time? Let us know in the comments, as we begin to put together our 2014 Honours List!