Model of the Moment

At last Monday’s British Fashion Awards Cara Delevigne won Model of the Year, for the second time. She’s been the most in demand face for quite a while now, and her star is only rising. Cast in a movie about the Meredith Kercher murder called Face of an Angel, recently spotted in the highly anticipated trailer for Joe Wright’s Peter Pan prequel, Pan (not to be confused with the weird-looking live action extravaganza starring Alison Williams as The Boy Who Never Grew Up) and now she’s been added to the stellar cast of the latest comic-book blockbuster, Suicide Squad, it appears that her ambitions now lie on the silver screen. Which paves the way for a new It-Model… which can only be Kendall Jenner.

The two have recently become firm friends – larking about at the BFAs, getting raunchy for LOVE magazine and recently together shunning the Victoria’s Secret spectacle in favour of appearing in Chanel’s Pre Collection showing in Salzburg. The rumours that have started regarding their close relationship are neither here nor there, but they do tap into the circus generated by both the interest in Cara’s love life and the intensely documented reality show origins of Kendall. 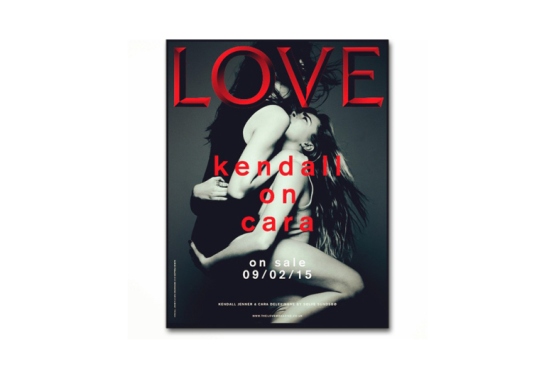 While Cara has appeared alongside Pharrell Williams in a short video directed by Karl Lagerfeld to promote the collection, it’s been said that Kendall is the Kaiser’s new muse. She’s been breaking into the high fashion modelling world (in contrast to breaking the internet, like her big sis) since 2009, having signed with Wilhelmina Models in June of that year, but her big break came in 2013’s Marc Jacob’s S/S show in New York when she stunned the front row, and moreso the global onlookers already au fait with the dark haired beauty, with her surprise appearance.

Since then she’s walked for Chanel, Balmain, Diane von Furstenburg, Pucci, Dolce and Gabbana and more, putting her firmly in the “in demand” pile. But still, after clearly proving her worth, in some quarters (*cough* other models *cough*) she’s still being looked upon with contempt. A recent open letter to her by model Arisce Wanzer (you can read it in full here) is filled with frustration, irritation even loathing and, yes, jealousy.

The modelling world has never, ever been known for its fairness, kindness or helpfulness – so what if Kendall comes from a privileged background, many other models (including Cara and Poppy, and Georgia May Jagger) do too? It’s just her particular background that irks the most. When a life is as exposed as Kendall’s it’s easy to point blame and to connect the dots on any lucky breaks she’s had, but you can bet that she’s not the only one who’s had an easier introduction to the fashion world than most others. Luck has a lot to do with any business like this one, but designers wouldn’t be hiring her and brands wouldn’t be using her if she didn’t have the genuine talent to back up her pre-packaged fame.

She’s just landed a beauty contract with Estee Lauder, and the countdown is on until she lands her first Vogue cover. Her family, like Lizzie Bennet’s is more of a hindrance than a help in some ways, and I think she should be congratulated on her success. It gets me thinking though – if Kim Kardashion had her little sister’s typical model figure rather than her exagerated curves and small stature, would she so often be labelled with the “vulgar” stamp? Possibly not, and with her own constant exposure and the honing of her image perhaps in time the public’s attitude to her will change. But for now it’s little Kendall Jenner who’s the model of the moment. Like it or not.