Back in Time Again

We had a brilliant children’s encyclopaedia in our home growing up. The one-volume tome was thumbed through so frequently the hardback cover had to be sellotaped back on muliple times before finally snapping and crumbling to dust.

The book itself has been buried under a mountain of childhood bric-a-brac since we graduated to the grown up version. Incidentally, no one can remember where our Funk and Wagnall’s New Encyclopaedia collection is kept now the internet provides us with all of our factual needs (It’s in the book shelf at the top of the stairs! It can be seen every time someone climbs up! But it might as well be the background to a school photo for all it’s worth now.) 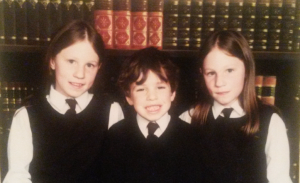 Anyway, one image from the Children’s Encyclopaedia that enters my mind from time to time is its timeline of fashion through the ages.

Starting with cave-dwellers and their funky (and functional) animal pelts, to the Elizabeth Taylor in Cleopatra inspired Ancient Egyptians, then the Ancient Greeks and Romans, the medieval times, the Renaissance – etc etc you get the idea – all the way to present day. It wasn’t entirely accurate – my dream era to live in was about the 1300s when I would get to wear a long velvet gown with elegant slippers and a pointy hat with a ribbon flowing from it… – but it did pique my interest in history. And fashion.

When you think of any era you picture the people of that times’ dress. Jane Austen’s heroines in their white empire-line Regency frocks, Nancy from Oliver’s busty wench costume and er, Austin Powers in his Swinging Sixties garb come to mind. I was discussing with friends a few days ago about how in the nineties we didn’t think we even had a particular style, that it borrowed from every other period in time but we so did. The nineties were grunge, they were Clueless, they were a plain and simple alternative to the crazy, over-the-top 80s, as one well-observing friend pointed out.

Friends was her example; the white tees, short, block coloured skirts, long pants in brown hues and not a shoulder-pad in sight.

When I was looking at the Fashion Timeline in my book I was likely wearing black leggings and a big blue woolly jumper – my go-to outfit when I was ten. That was twenty years ago (gasp!) and I wore an outfit much like it last winter. I didn’t think at the time that it was a nod to the style of my younger self – probably because, to be honest, my younger self didn’t really know what style even was – but thinking back on it, I wouldn’t have worn leggings and a big baggy jumper five years ago. In fact it would have been unthinkable! The cyclical nature of style is a true thing.

My least favourite decade was the 80s. Catching even a glimpse of Degrassi Junior High was enough to make me gag and I couldn’t believe the get-up our parents put us in when we were kids nor the get-up they put themselves into. The twist – I went to a 80s themed party a few weeks ago and bought a jacket from the era for the occasion (in Oxfam on St. George’s Street.) Now, I am dying for a chance to wear it out and about in real life.

I was pretty horrified to see all sorts of crazy Bon Jovi / Bonnie Tyler / American Trailer-Trash style haircuts in The Workman’s Club last Friday worn with pride by people about ten years younger than me. I had to wonder, is this the new hipster? The ‘modern’ way for college age kids who wish to be a bit different to dress? It’s a terrible thought but they probably will and sooner or later people my age will likely adopt the look themselves.

To complete the circle, I’m getting my hair cut at the weekend and even though I looked through 2014 street style for inspiration I realised the style I’m going for is none other than ‘The Veronica’.