Town Mouse, Trend Watch, What to Wear by townmousecountrymouseirelandJune 4, 2014

It was bound to happen eventually, in fact, I’m surprised it’s taken this long. The backlash against festival fashion has started and right now it’s in full force.

Writing in The Irish Times last Wednesday, Sarah Waldron proclaimed that “Woodstock birthed [festival fashion] Glastonbury brought it to maturity and Coachella killed it.” It’s a broad statement but apt (if only because she name-checked three big festivals that everyone knows.) The festival as we know it exists thanks  to Woodstock, and since most music and ‘arts’ festivals inevitably aspire to their great master, there is always a hippy-esque feel to them.

Sure the garlands of flowers Woodstock-goers wore were actually of the earth and not plastic numbers from Penneys but imitation is the most sincere form of flattery and festival fashion has stood the test of time. Oh wait, until now.

Kate Moss (you didn’t think I was not going to mention her did you?) turned the tides around when she famously wore Hunter wellies and tiny shorts to Glastonbury in 2005.  With no flowers or floaty material in sight La Moss started the urban-girl festival look that had so many gals simply spending a whole lot of time and effort trying to emulate.

But very few of them could pull it off, and even if they did they were still being totally dull and unimaginative – despite the bright pink lipstick they were probably wearing. However, we shouldn’t have been surprised that a look would be born, especially given the rise in number and popularity of festivals, in Ireland at least. 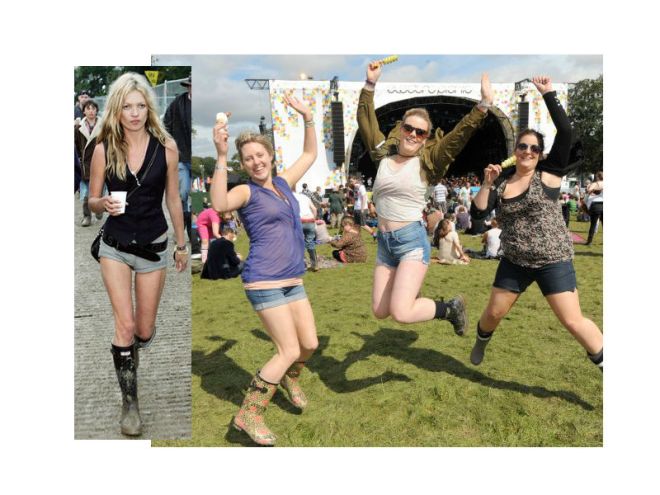 While I can see her point in many ways, Waldron mentions in her Irish Times article ‘The Death of Festival Fashion’ that both sexes are ‘required’ to wear wellies  “even if the weather or terrain means that they could easily be wearing flip-flops.” Now I can only assume that that the glorious but highly unexpected and miraculous weather at last year’s Electric Picnic had a very much prolonged rose-tinted glasses effect on her because more than likely, at any festival in Ireland or the UK, well, ya need a pair of wellies! She might have been including foreign fests but honestly, I don’t think anyone packs their rubber soled lifesavers when they are going to party in a desert in California or a beach in Croatia.

When CM and I went to our first festival, Oxegen in 2004, Kate Moss must have been there, seen us and taken note because we were about the only ones who dressed appropriately for the occasion. In jeans, raincoats and yes, our wellington boots (not Hunter, sadly, they were of the green farmer variety) we weren’t as miserable as we would have been in rain-sodden runners or puckered feet clad in flip-flops. 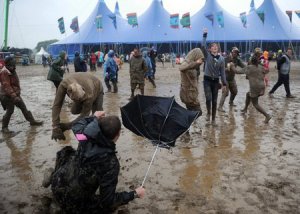 I was at Forbidden Fruit on Sunday and the weather was lovely! Rain had been forecast but I left my wellies behind and wore a pair of white (yes, white!) converse with skinny jeans, a loose grey string-top, a couple of stacked chains and my light parka, with a cardigan in my bag to layer under my jacket when it got cold.  So far, so, well, normal, but I was comfortable and content and I felt good. The key was in keeping it simple but jazzing it up a little bit with the jewelry and make-up; it is a party after all!

The mistake folks make when it comes to festivals is that they take it as an opportunity to pretend to be people they’re not. I am all for dressing up, those having the best fun at festivals are more often than not those wearing crazy get-ups, but those looking blue (not least because they are showing an awful lot of skin while the wind chills around them) are the ones trying to be Alexa Chung, Kate Bosworth and obviously Ms. Moss.

You will see the high street filling up with festival clothes in the next few weeks. They will be telling you to wear fringes, crochet and…look above – things like what the Jenners and Selena Gomez were advised by their stylists to wear.

Don’t buy it. I mean, buy it if you like, obviously, just – don’t wear clothes that have ‘festival’ written all over them because you feel you’re obliged to. Follow your own nose, keep your personal style, and for God’s sake be practical! The main thing is to always, always be yourself. Although if you’re a barrister I wouldn’t recommend wearing your court atire.