So there I was thinking we had seen the last of awards style – aside from Cannes of course but that’s a different, stand alone, seasonal kettle of fish – and along comes the BAFTA TV Awards. Classier than all of those other British TV gong shows where fake tan, uber high hem-lines and neon hues are the typical look (ever wondered where the punters at Aintree get their ‘style’ inspiration? There’s your answer.), more is expected from those who grace the prestigious BAFTA red carpet..

Unfortunately, this usually means everyone tries their best to play it safe and this year’s BAFTA TV do was no exception. Utterly boring was the theme of the night it seems – even Helena Bonham Carter reeled it in.

However (there’s always a however when it come to HBC) the actress, nominated for her work on mini-series Burton and Taylor, took the number one spot in our Best Dressed list. Sure, her dress is long and black but it’s beautifully structured – angular at the top, floaty at the bottom – and suits her to a tee. Her neck piece is subtle without fading in to the background and Helena adds a hint of her trademark quirk with those funky looking shades. Her hair could have done with a bit of extra work, but all in all, Helena proved to be a winner in the style stakes. 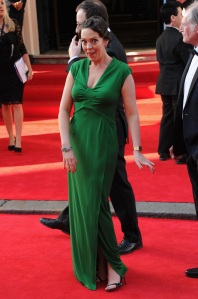 Olivia Coleman took the Best Actress crown on the night, deservedly, for Broadchurch. Despite criminally being left out of the American adaptation because apparently, she didn’t fit the US ‘vision’, she looked every inch the leading lady in this emerald green show stopper. Apart from being a gorgeous colour and fit, this guna looked comfortable and Olivia looked happy in it. Her shoes were the perfect match, her hair and make up were lovely but still very her. Olivia stood out amongst the hot young starlets and wannabes and showed who the real star was.

Rochelle Humes definitely made a noble effort but the skirt was simply too long. You would think a woman constantly photographed at events would know that a dress that bunches at the end looks amateur. Someone going to their Debs would have lobbed at least a foot off the end. I can tell that she was going for an edgy touch with the unusual modern-take-on-a-bodice-type-thing the top is trying to be but it sadly looks cheap and ill-fitting. Nice make-up though.

Was Oona Chaplin having a laugh dressing up as Edie Monsoon’s idea of a 1970’s flamenco dancer? Sure, she has Spanish blood and her grandad is legendary comedian Charlie Chaplin, but come on. No need. I don’t need to say it really but – yuck. I’m going to give kudos though, for not wearing black.

Her.ie has paired up with Aussie Hair Products for the Aussie Blog Awards! If you think we have what it takes to be crowned Most Awesome Fashion Blog, why not throw an old nom our way?!