Post by CM Last weekend I was improbably, but pleasantly surprised to be introduced to 1960s Czechosolvakian New Wave Cinema and now I’m going to tell you all about at. And you’ll like it. No really, you will! Daisies is an ambitious and surrealist response to the regime of the era, starring two amateur actresses (let’s stick to old fashioned terms, since we are talking about a country that doesn’t exist anymore) and helmed by the only female director of the movement, Věra Chytilová. It’s decidedly absurdist and farcical, with a knowing wit and ambiguous theme that led to it being banned by the suspicious Communist Government.

The two main characters are impish and mischievous youngsters both named Marie, who are fed up and bored and in need of fun, so decide to run amok by, amongst other things, conning meals out of older gentlemen, causing commotion in a nightclub and breaking and entering an official’s dinner party by way of a dumbwaiter. It all goes awry in the most peculiar and creative way, and it’s a riot to watch, not least for the stunning cinematography and compellingly disconnected narrative, but because they are some seriously stylish laydees. 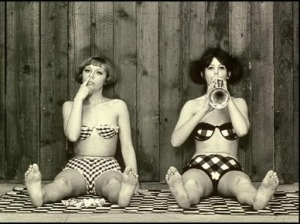 If ever there’s been inspiration to put away your skimpy string bikini in favour of some alternative beachwear, it’s here. Trumpet notwithstanding (although it does add a certain je ne sais quoi!) the Maries work these gingham two-pieces. Happily, similar high-waisted styles are making a come-back and can be found anywhere from Topshop to the more high-ended retailers. 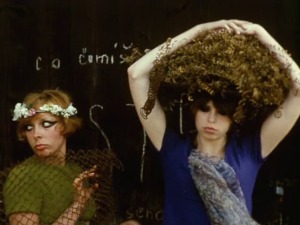 As much as I love the wide-brimmed moss hat look, a flower garland is probably easier to pull off. Take note, they’re available everywhere come festival time. The one I’m wearing here is a 20-year-old relic from my flower girl days (I think I may have a hoarding problem). 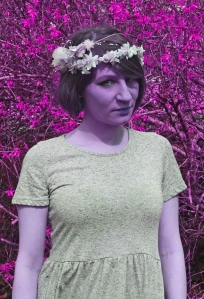 These simple little swing dresses are, again, really easy to find in the shops at present, and perfect for just throwing on, paired with a court shoe, for when you’re in a hurry to spread some anarchy. Mine (below) cost me the princely sum of €7 in Penneys. Just add a dollop of thick black eyeliner and away you go! 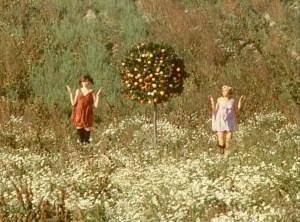 Babydoll dresses and thigh-high stockings should probably be left to those over 18 but under 23. There’s a very narrow window for that particular look!

If you’re stuck in a rut of apathy and in the mood for some nihilistic whimsy, a peek into a curious time in European cinematic history and some rousing style inspiration then seriously think about pushing up some Daisies* – they’re as fresh as they were back in 1966!