On March 29th 2004 (which will be a whole decade ago this Saturday) something happened that changed Irish society forever. The government introduced a ban on smoking in the workplace – meaning all places of work – although most people remember that date as when all cigarettes, cigars and pieces of apparatus that can accommodate big bad tobacco were no longer welcome in the inns.

Despite protestations at the time, the decision turned out to be a good one for non-smokers for many reasons (not coming home stinking of stale smoke, not having a worse hangover, not, ah, developing horrible diseases thanks to second-hand smoke, to name a few) but it also created a new type of smoking society, where the naughty smokers would gather together in the newly established smoking areas, which were at first nothing more than a couple up upturned beer barrels for chairs and windowsills for pint-rests, but evolved into comfortable and warm havens. 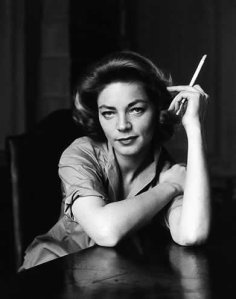 Everyone knows that smoking is disgusting, wrong, stupid and extremely unhealthy but people’s relationship with cigarettes is more complex than ‘mere’ addiction.

A curious element of ‘coolness’ (and I hate to admit it but it’s true) is associated with smokers – just look at the fabulous and sultry Lauren Bacall in the snap above. James Dean relied on a ciggie hanging from his mouth for that extra cool factor. He would have given a whole different impression had he been chewing on an apple instead. 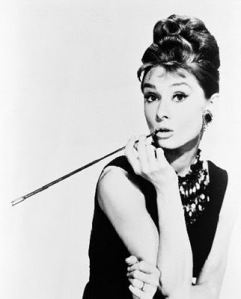 The ultimate party girl Holly Golightly would never have left her cigarette holder (obviously complete with cigarette) behind when out socializing. The holder is one of the character’s sartorial trademarks and nobody who emulates her at Halloween or other fancy dress parties would forget it.

Of course, people did not know the extent of the dangers of smoking in Bacall and Audrey Hepburns‘ time, so we can forgive them for using cigarettes as chic and sexy accessories.

Kate Moss, in her 90s hey-day should have known better. 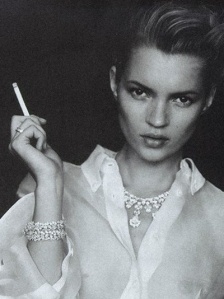 However, as poster child for a fashion movement which celebrated emaciated bodies, the look lovingly dubbed ‘heroin chic’, Moss and her ilk were too busy being the epitome of cool kids, the types who skip school and if they did turn up would be more likely to be found in the toilets – smoking – than in class.

No matter how utterly ridiculous it is, even the smartest of us are in awe of the rebels without causes. Smoking is NOT cool – but cool people smoke.

Obviously, not all people who smoke are hip and trendy, and more often than not, people smoking look terrible. Go out any night in Ireland and witness men, women and youngsters suck away on their cancer sticks in the freezing cold or rain or both, often without their coats on for some inexplicable reason (a particular bug-bear of mine) baring goose-pimpled skin. 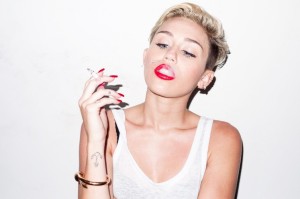 Luckily, young celebs like Miley Cyrus and Justin Bieber are proving that the days of smoking being associated with being in the in-crowd are numbered. Miley, in the pic above, is being her usual try-hard self, attempting to push boundaries while remaining a little copy-cat with no imagination. 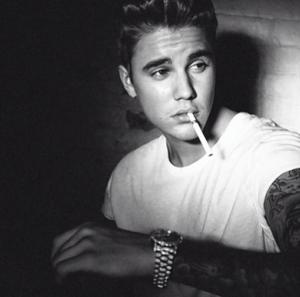 Beiber recently released photo of himself on Instagram inspired by James Dean for no other reason than to, I don’t know, confirm that he’s a bad boy (…) although he did include this revelatory text, ‘Don’t ask me if I smoke ciggys cuz I don’t.’ So why include the ‘ciggy’, Justin? Why? Pathetic.

I can’t deny it,  I have been known to inhale the poison from time to time and I have to say I’ve met very cool people in the smoking area, where I’ve also had some extremely successful style-spotting sessions.

But when it comes down to it, yellow fingers, bad breath, grey skin and lip-puckered wrinkles are simply never, ever a good look.