Image, Occasions and Events, Town Mouse, What to Wear by townmousecountrymouseirelandDecember 10, 2013November 19, 2018

Even though my wardrobe is packed to the brim I have Nothing to Wear. It’s a common problem around this time of year, especially since once the silly season comes round we change from chic sophisticates into manic, sequin clad party queens (or kings) and we manic sequin clad royalty need sequins and sparkles and glitter and lights for our Christmas party outfits.

Well, we need them for most outfits.

The one exception is the Office Party Outfit. What? I can’t wear sparkles to my Office Christmas Party? No, no, you can. I just wouldn’t advise it, that’s all.

Though I am usually firmly in the fashion-rules-are-made-to-be-broken camp, there’s something about the office Christmas party that makes me want to stay on the right side of the law. Office parties are tricky business for the most part and I have found that it’s always best to err on the side of caution.

It can be very hard to gauge what the dress code is for an office party. Cocktail  if you normally wear smart? Smart if you usually wear smart-casual? Night in Coppers if your office is a jeans and t-shirt kind of place? I know it’s easy to say but I would always recommend not dressing too formally and not dressing too casually. You should be – somewhere in between. 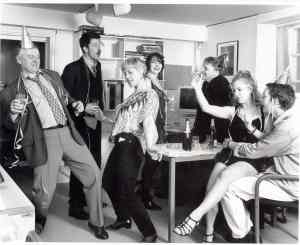 This is what you should wear – if going to a Christmas party in the 90s. But what does that mean? It’s easy!

I was going to write a list but it actually comes down to this – if you want the simple life like I do:

Women
Don’t wear exactly the same thing that you wore to work. But don’t worry, this doesn’t mean that you have to bring a whole new outfit with you, not at all! You just need to be adaptive and a little bit creative. For example, I would wear an LBD with black tights and flat shoes (which will come in very handy come going-home time) and a cardigan/jumper over it for during work hours.

For night, I would just change from black tights into tan – if you’re brave why not bare your legs – don a pair of heels – NOT too high – and add a statement necklace.

It’s also easy to change up a trouser based outfit. DO the same thing except swap the top you wore during the day for a slightly lighter one for night (yes lighter. You’re allowed to wear your coat over it for outside you know! It gets warm in restaurants and bars.) Easy peasy.

Men
I know how you feel self conscience when wearing something other than the norm for you, but all you have to do is wear nicer shoes than usual – shoes you’re used to wearing that won’t cripple you – and bring a change of top or shirt. That’s it!

People get stressed about their office Christmas party for many reasons; knowing they’ll have to make small talk with the boss; wondering if they’ll be lumbered with the office bore; worrying if the free booze will run out; paranoid that they’ve had one too many and no one else is as drunk as them. Well, I can’t help with that, but I hope that this has lessened the pressure a little bit.

Have a good party!