Costumes Parisiens: Fashion Plates from 1912-1914 at the Chester Beatty Library

I hadn’t had what I call a ‘Proper Saturday’ in a while so I was determined to have one this Saturday just passed. A Proper Saturday to me is an early rise, a brisk walk, a nice coffee and breakfast while poring over the weekend papers and then a jaunt into town to check out a museum or gallery and then maybe meet a friend, perhaps have a nice dinner etc. etc., you get the idea.

On Saturday October 12th I found myself at Dublin’s Chester Beatty Library, one of my favourite museums in the world. Well, I didn’t just find myself there admittedly, I went there with a purpose – to see its most recent Special Exhibition Costumes Parisiens, Fashion Plates from 1912-1914. 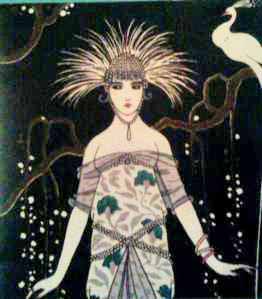 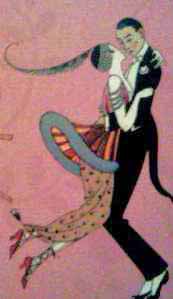 The exhibition is comprised of over 100 prints from Journal des Dames et des Modes – one of the most prominent fashion magazines of the early 20th century. Clearly aimed at a very particular type of lady (the type who wore at least four outfits a day, like Chester Beatty’s first wife Edith Dunn) each collectible edition held 2-5 pochoir prints by some of the most famous and sought-after fashion illustrators of the time, including George Barbier, Charles Martin and Bernard Boutet de Monvel. They were inspired by the fashions of the day and the fabulous women who wore them, and the costumes designed that featured on the prints were in turn copied by the women, only to create a sartorial circle, not vicious in the slightest.

The exhibition takes up little space, just one room upstairs, but it sure packs a punch. The collection is outstanding and a must-see for all lovers of fashion and art. The historical and sociological aspects are also really interesting.

The pochoir or printing process was quite complicated and ended up being very expensive so each plate is considered a mini masterpiece. The illustration was first sketched in pen, then ink, then watercolour, before the end result was engraved onto a copper plate. Specialist printers then added colour and a découpeur would cut stencils for each separate tone using sheets of copper, zinc or aluminium. A colouriste would then apply paint to the illustration, matching the colours of the original sketch followed by the creation of subtle graduations in colour by craftsmen. The whole ardous process was highly complex but the end results were extraordinary and thanks to the efforts of all of the artists involved the works have retained their original glory.

I spent ages at the exhibition without even realising it. Added extras are four amazingly gorgeous century-old  gúnas and a projection of film taken from the time featuring the It-Girls of the time strutting their stuff.

You really can’t afford to miss this and it would be fairly hard to, since it runs until the end of March 2014. Why not include it in an itinerary for your very own Proper Saturday – bring a friend, swan around like a 20th Century It-Girl and later on take the polished, glamorous attitude with you for a night on the tiles?!