Hipsters. I find myself fighting in their corner from time to time, probably because I often get mistaken for being one (blame falls on the huge black framed glasses I save as my “weekend eye-wear”.) They get a bad rep, hipsters do, they merely want to be “individual”. Because I’m not actually a true hipster I can’t claim to know what their raison d’etre really is, but I believe that they just want to hang out with each other, eat funny food, drink cheap alcohol, listen to un-mainstream music and cycle their bikes around. And occasionally put together cool outfits. There, I said it. Just because their clothes comes from jumble sales, charity chops and …er… Urban Outfitters, doesn’t mean that they don’t look good.

Last Tuesday – a week ago – I attended an event in the Fumbally Cafe that was a hipster dream. The food was raw (and Delicious with a capital D), a bottle of wine was €20 and the band was fusion-traditional Irish fronted by an American Irish dancer (they are called This is How we Fly and are very cool – look them up!).

It was a nice night and even though I got pushed and shoved a lot and people didn’t respect other peoples’ seating/standing place (mine to be exact) I had a good time. The (hipster-esque) owners kicked us out in a really nice way at the end of the night, by just sauntering over to the inevitable groups of stragglers, chatting for a minute and then asking them to leave. I hope to attend more Fumbally events in the future – not only are they are great for people watching, they make a real effort to make sure it’s unique and that everyone is having a good time.

Back to the style though, it was typical hipster fare. I do realise that remark is quite flippant given the nature of hipster attire. Well, it was a jumble and a nice jumble. Other semi-hipsters made an effort too, I saw lots of Topshop style jewellery and nice flats. I wore a red dress with daisy print from Topshop that I bought in January in the sales, with flesh tights (!) and black ankle boots from New Look. I wore a jacket too, plain army green. Again, I must apologise for lack of personal style photos but until I buy a proper camera such pictures are impossible in the dark (no flash on my phone). However, here is an idea of the atmosphere. 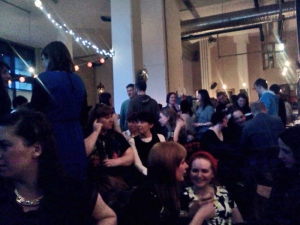